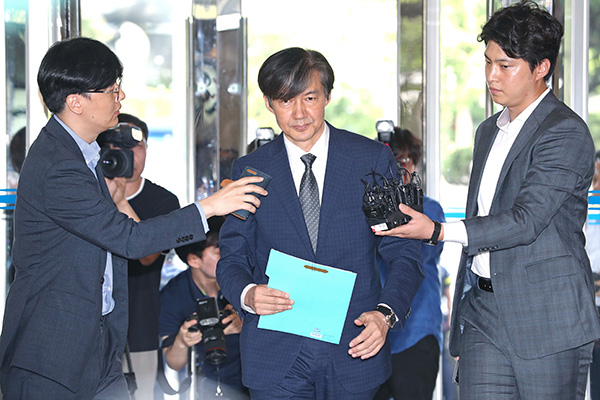 Rival political parties remain at loggerheads over justice minister nominee Cho Kuk amid a preponderance of allegations regarding his suitability for the post.

Lee In-young, floor leader of the ruling Democratic Party(DP), said on Thursday that the main opposition Liberty Korea Party(LKP) is “desperately opposing” the nominee as it wants to stop judicial and other reforms planned by the Moon Jae-in administration.

He made it clear that the ruling party has no intention to withdraw its support for Cho, demanding the LKP stop sensationalizing and fix the schedule for a confirmation hearing by Aug. 30, the legal deadline.

LKP Chairperson Hwang Kyo-ahn, meanwhile, said that Cho should be investigated by the prosecution. He said that the party will hold him to account through a prosecutorial or parliamentary probe.

He also said that President Moon should withdraw Cho’s nomination and apologize for it.

Minor opposition Bareunmirae Party Floor Leader Oh Shin-hwan said that the party will take the issue to the prosecution after reviewing allegations related to Cho's family.

He said that a special probe will be necessary if the case isn't investigated thoroughly.
Share
Print
List