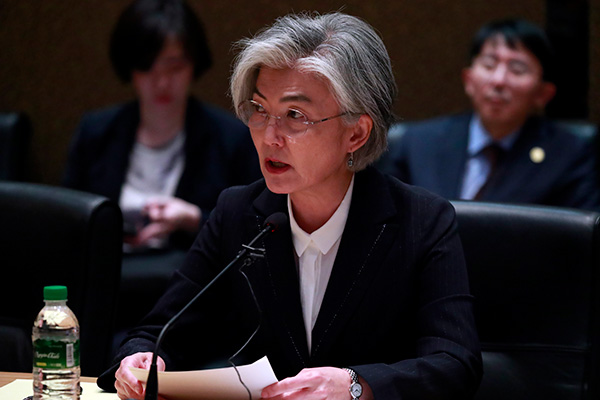 South Korean Foreign Minister Kang Kyung-wha says she has a heavy heart  after Wednesday's meeting with her Japanese counterpart ended without resolving the bilateral conflict over Tokyo’s trade restrictions on Seoul.

Kang made the remarks during a meeting with South Korean reporters in Beijing on Thursday after wrapping up this week's trilateral foreign ministers’ meetings with Japan and China. The previous day, she sat down with Japanese Foreign Minister Taro Kono for talks that lasted less than 40 minutes.

Kang said she delivered Seoul’s deep regret over the export curbs and strongly urged Tokyo to immediately scrap the restrictions.

She said although no progress was made at the meeting, South Korea has learned more about Japan’s stance and vice versa. Emphasizing the need to continue dialogue to address the issues, she said Seoul will continue making related efforts.

During Wednesday's talks, the Japanese side is known to have expressed hope a military intelligence sharing agreement with South Korea will be extended. In response, a Seoul official said the final decision is up to the presidential office, but the outcome of the foreign ministers’ meeting would be factored into it.

Saturday marks the deadline for either side to express its intent not to renew the pact for another year. The current agreement is set to expire in November.
Share
Print
List