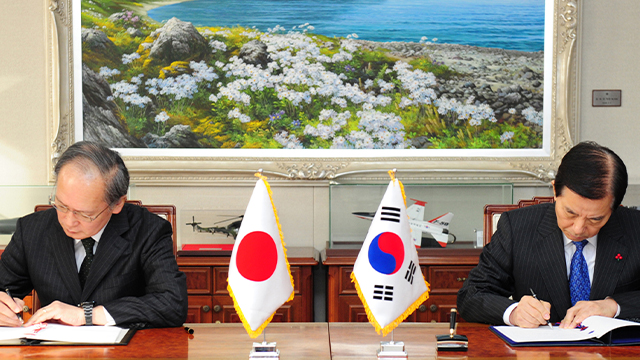 The U.S. Department of Defense expressed "strong concern" and "disappointment" on Thursday after South Korea withdrew from a military intelligence-sharing pact with Japan.

Pentagon spokesperson Dave Eastburn said in a statement that “the Department of Defense expresses our strong concern and disappointment that the Moon administration has withheld its renewal of South Korea's General Security of Military Information Agreement(GSOMIA) with Japan.”

The spokesperson said the U.S. strongly believes that the integrity of its mutual defense and security ties must persist despite friction in other areas of the South Korea-Japan relationship.

He added that the U.S. will continue to pursue bilateral and trilateral defense and security cooperation where possible with the two allies.

The statement follows a stripped-down initial response from the department, which simply expressed the U.S.' hope for a swift resolution of issues between Seoul and Tokyo.

Earlier on Thursday, South Korea announced its decision to pull out of GSOMIA amid trade and historical disputes with Japan.
Share
Print
List