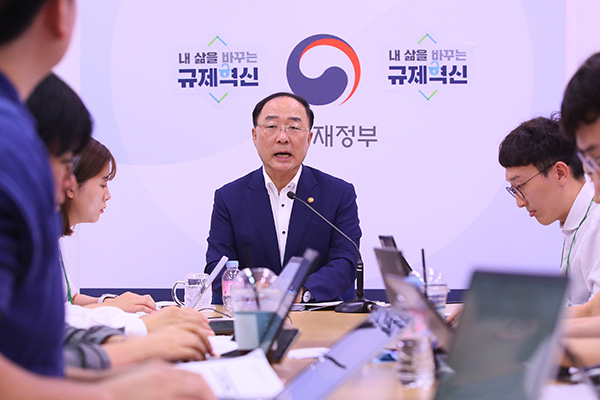 South Korea's total budget is expected to be about 513-trillion won next year, about nine percent higher than this year.

Finance Minister Hong Nam-ki said in a press meeting on Friday that the 2020 budget plan, which the Finance Ministry is now preparing, will inevitably be expansionary.

He said that the ministry is taking into account the need for active fiscal policies as it has to invigorate a slowing economy and support inclusive growth.

He estimated that the country's debt to gross domestic product ratio will rise to the upper 39 percent range next year from 37-point-two percent this year.

The Finance Ministry is scheduled to submit a budget plan to the National Assembly on Sept. third following a meeting between the ruling party and the government next Monday and an extraordinary Cabinet meeting next Thursday.

The finance minister also spoke on Seoul's decision to scrap an intelligence-sharing pact with Japan, saying that the government will work to minimize any negative impacts the move may have on the economy.

He said a contingency plan is in place to prepare for any increases in financial market volatility.

He added that it isn't time yet to adjust the government's growth target for this year, currently set at two-point-four to two-point-five percent.
Share
Print
List