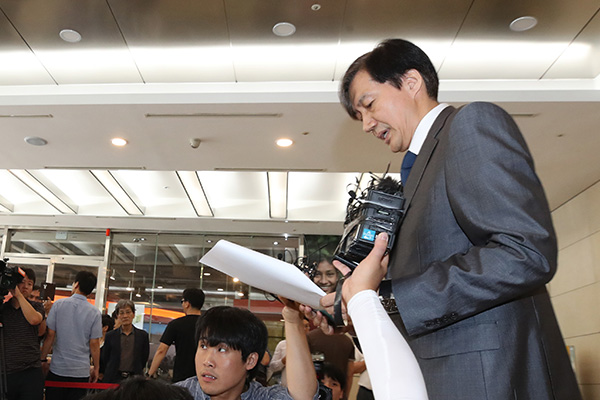 Justice minister nominee Cho Kuk has vowed to donate a private equity fund suspected of being part of a scheme to transfer his wealth to his children without paying inheritance taxes.

Reading from a prepared statement on Friday, Cho said he will make sure the fund is donated to a nonprofit to be used to assist socially underprivileged groups. Cho's family had initially pledged to invest seven-point-four-billion won in the fund, but actually invested slightly more than one billion won.

He explained the decision was made by his entire family out of sincerity and not to avoid public criticism.

Cho's mother, who is the current board chairperson of Undong School run by the family, will also step down from her post, and the family will hand over management to the state or a nonprofit foundation.

Cho also said his family will not exercise rights to any of the assets his family invested in Undong School, which some alleged have been misused as a means to help the nominee's family amass great wealth.
Share
Print
List