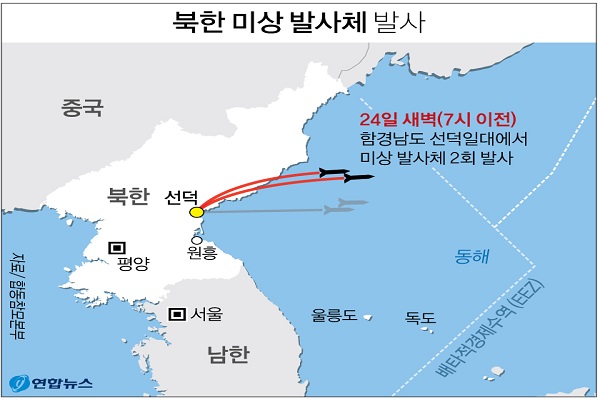 Earlier, the Joint Chiefs of Staff revealed the two projectiles fired into the East Sea flew around 380 kilometers at a maximum altitude of 97 kilometers and a top speed of Mach six-point-five.

Launch of ballistic missiles, regardless of the range, is a violation of UN Security Council resolutions sanctioning Pyongyang.

In May 2017, North Korea fired a ground-to-air guided weapon system suspected to be the KN-06 from the same eastern town of Sondok in South Hamgyong Province.

Similar launches were conducted in the same area the previous year.

In initial assessments, military experts believe North Korea could have fired one of those newly developed missiles showcased since May but further raised the launch angle this time.

The maximum altitude of 97 kilometers is the highest reach of all projectiles the North fired over the last nine launched this year.

Experts say it could be the same type of projectile seen previously but fired at a higher angle or could be a different type altogether given the sharp difference in maximum altitude.
Share
Print
List