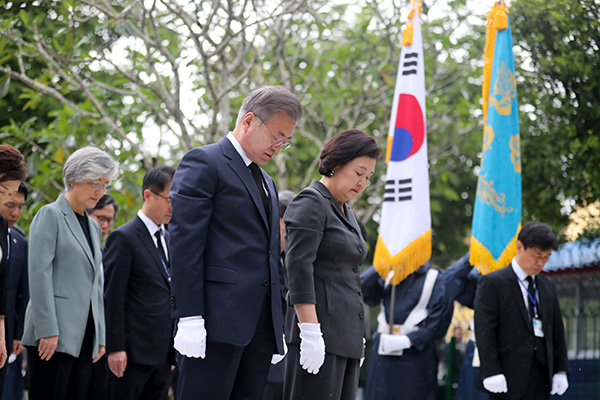 President Moon Jae-in paid homage to the South Korean victims of a North Korean attack in 1983 in Yangon during an official visit to Myanmar.

The president on Wednesday visited a monument at Aung San National Cemetery dedicated to the 17 South Koreans who were killed when North Korean agents bombed the Martyrs' Mausoleum in an attempt to assassinate then South Korean President Chun Doo-hwan.

Moon is the first South Korean president to visit the monument, which was erected in 2014.

Ahead of visiting the memorial, Moon attended a groundbreaking ceremony for the Korea-Myanmar Industrial Complex. He expressed hope that the complex will play a key role in duplicating in Myanmar the fast economic growth that South Korea experienced over the past decades.

The complex is scheduled to be completed in 2024 and is designed to serve as a stepping stone for South Korean firms to advance into the Myanmar market.