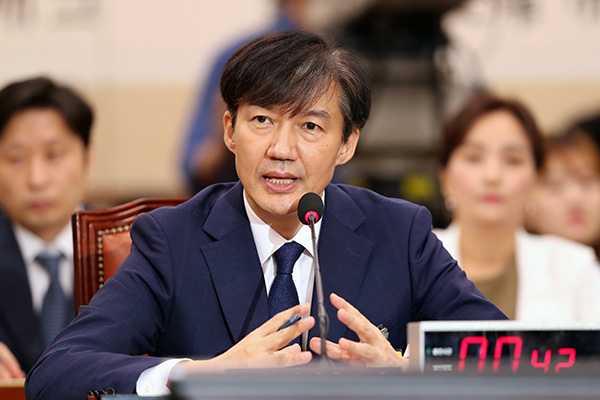 Anchor: The National Assembly held a confirmation hearing for controversial justice minister nominee Cho Kuk following weeks-long partisan wrangling over how and when to hold the question and answer session. While the nominee apologized to the public and reaffirmed his commitment to President Moon Jae-in's reform drive, much of the time was spent on allegations surrounding his daughter.
Choi You Sun reports.

[Sound bite: Justice Minister Nominee Cho Kuk (Korean)]
"I greatly disappointed the people with issues regarding myself and my family. Moreover, I deeply apologize to the country's young generation striving for new opportunities. It's all my fault. I sincerely apologize to the people who felt deprived and hurt from all this."

[Sound bite: Justice Minister Nominee Cho Kuk (Korean)]
"Despite [the concerns], I believe I have a calling that I must fulfill. It is my determination to place a small stone for the work of establishing a society where the state authority is properly functioning by checks and balances and the basic rights of all the people are guaranteed for their humane lives."
"I believe completing reforms of the judiciary and the prosecution as I have promised would be my duty and my way of returning the privileges I enjoyed to the people."

However, the ruling party criticized the opposition for disclosing the daughter's high school student record, which is considered private property. The nominee expressed hope that law enforcement would find those who leaked the record.
Choi You Sun, KBS World Radio News.
Share
Print
List