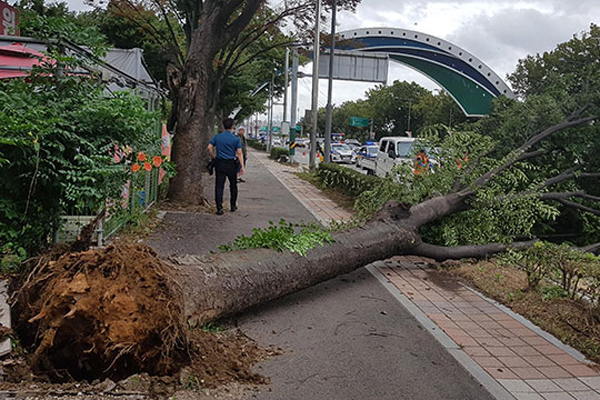 The Central Disaster and Safety Countermeasures Headquarters confirmed that three people died and 26 were injured as of 11 a.m. Sunday.

A woman in her 70s died in Boryeong, South Chungcheong Province after she was knocked over by strong winds, and a bus driver in his late 30s died at a parking lot in Incheon after walls collapsed on him due to the heavy winds.

Later in the day in Paju, north of Seoul, a 61-year-old man was killed after being struck in the head by a roof panel at a golf driving range.

While more than 160-thousand households across the country experienced power outages during the day, the state-run Korea Electric Power Corporation said on Sunday that it has fixed most of the power failures.

About 930 reports were filed with authorities on damages to facilities as a result of the strong winds, and over seven-thousand hectares of farmlands were hit by the strong typhoon.

As of 6 a.m. Sunday, 232 flights were cancelled at 13 airports across the nation, including Incheon, Gimpo and Jeju airports.
Share
Print
List