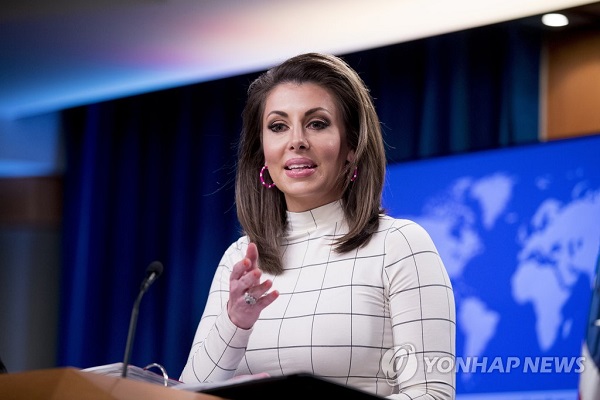 The U.S. State Department welcomed North Korea's offer to resume nuclear negotiations with the U.S. later this month as "encouraging."

But the department did not elaborate on North Korea's demand of a "new calculation method" from Washington, and said that Secretary of State Mike Pompeo and Special Representative for North Korea Stephen Biegun will discuss it with Pyongyang.

In a Thursday briefing, spokeswoman for the State Department Morgan Ortagus reiterated the goal of the North's final and fully verified denuclearization.

She said the U.S. welcomes North Korea's statement saying it was an encouraging sign that they would like to return to negotiations but that there are "no meetings to announce as it relates to that."

Ortagus noted North Korea's recent tests of short-range ballistic missiles and other projectiles were "provocations" and not helpful.

She added that the goal of a denuclearized North Korea has not changed and will not change.

North Korea said on Monday it is willing to meet with the U.S. in late September but expects Washington to come up with a new proposal that it finds acceptable.
Share
Print
List