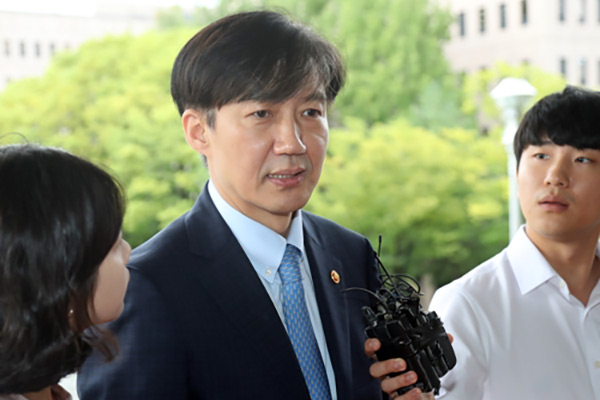 Prosecutors are into their second day of investigating a cousin of Justice Minister Cho Kuk on Sunday on allegations surrounding Cho and his family's investment in a private equity fund.

The cousin, also surnamed Cho, was arrested at Incheon International Airport on Saturday on embezzlement charges, and then transported to the Seoul Central District Prosecutors' Office for interrogation.

Questioning continued into the early hours of Sunday before being transported to a detention center in Seoul. The prosecution resumed questioning for the second day on Sunday morning.

Prosecutors are likely to request a formal arrest warrant for the cousin as early as Sunday as they can detain him for up to 48 hours.

The minister's cousin is suspected to be the actual operator of the firm called Co-Link Private Equity, which manages the fund in question. He left the country in late August when speculations involving the then minister nominee surfaced.

The arrest comes as prosecutors are widening their probe into corruption allegations surrounding the minister.
Share
Print
List