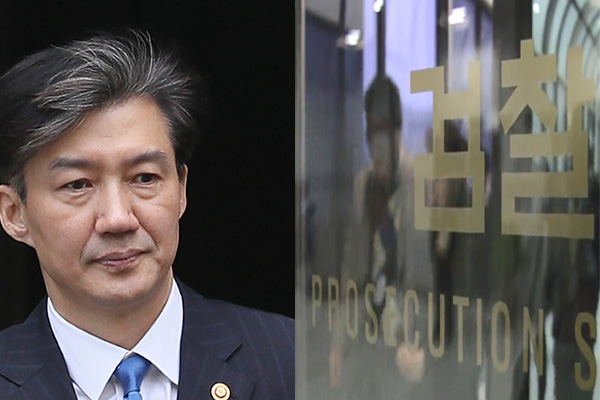 Anchor: Prosecutors have arrested a relative of Justice Minister Cho Kuk in connection to allegations surrounding a controversial private equity fund the minister's family had invested in. It's expected that Cho's wife will be summoned for questioning soon, as prosecutors investigate her suspected involvement in the investment.
Choi You Sun has the latest.

The court issued the pre-trial detention warrant late Monday saying most of the facts of criminal conduct have been explained by the prosecution and that the suspect poses a risk of fleeing or destroying evidence.

The arrest warrant for the minister's first cousin once removed is the first to be issued in the prosecution's widening probe into allegations of various misconduct by the Cho family.

The relative, also surnamed Cho, is accused of running Co-Link Private Equity without officially registering as its chief executive, acquiring a listed firm without capital, rigging stock prices and embezzling billions of won from companies invested in by Co-Link.

The private equity firm is the operator of a so-called "family fund" to which the minister's wife and two children, as well as his brother-in-law and his two children, invested a combined one-point-four billion won.

Prosecutors suspect the wife of Minister Cho, Chung Kyung-shim, may have illegally intervened in the investments, especially after they obtained testimonies that part of the 500 million won Chung loaned to her sister-in-law was used to establish Co-Link.

After grilling the relative on Chung's alleged role in the establishment and management of the fund, prosecutors are expected to summon Chung for questioning as early as this week.

Prosecutors also interrogated the minister's daughter on Monday over allegations that she was admitted to prestigious universities on the back of exaggerated internship experiences and fabricated certificates.

She was also questioned about being listed as the primary writer of a published medical paper during a high school internship at Dankook University as well as her mother's alleged role in fabricating a school award to help the daughter enter medical school.

Chung was indicted earlier this month on charges of forging private documents.

Prosecutors believe Chung conspired with others in 2012 to forge an award from the president of Dongyang University, where she works, to get her daughter into prestigious universities in South Korea and abroad.
Choi You Sun, KBS World Radio News.
Share
Print
List