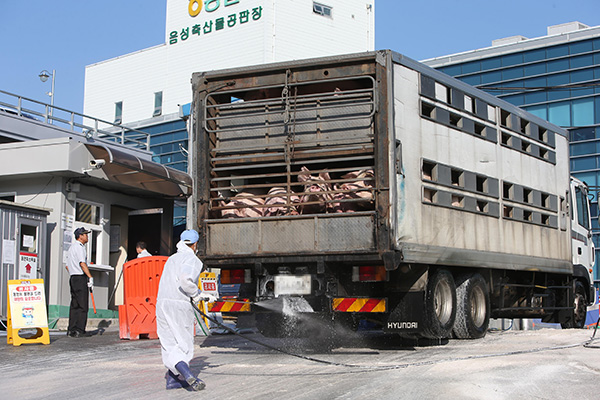 The Ministry of Agriculture, Food and Rural Affairs said on Thursday that it has lifted the 48-hour movement ban that was imposed on all pig farms, slaughterhouses and feed factories across the country on Tuesday. People and vehicles are now allowed to come in and out of the facilities.

Transporting pigs out from areas affected by the disease, however, will continue to be prohibited. This ban will continue until noon next Tuesday in Gyeonggi Province and Incheon, and until noon on Oct. 8 in areas designated as tightly controlled zones.

Six cities and counties, including Paju and Yeoncheon of Gyeonggi Province, were designated as tightly controlled zones as part of quarantine efforts. Around 700-thousand pigs are raised in 437 farms in these areas.

The government is strengthening quarantine efforts in these areas, deploying trucks for disinfection and increasing the supply of quicklime to further help limit the disease’s spread.

ASF was first confirmed at a pig farm in Paju on Tuesday morning, followed by another case in Yeoncheon on Wednesday. The outbreak comes roughly four months after North Korea first reported the presence of the disease at a farm near its border with China.

ASF does not harm humans but is lethal to domestic and wild pig species. There are no vaccines or known cures for the disease.
Share
Print
List