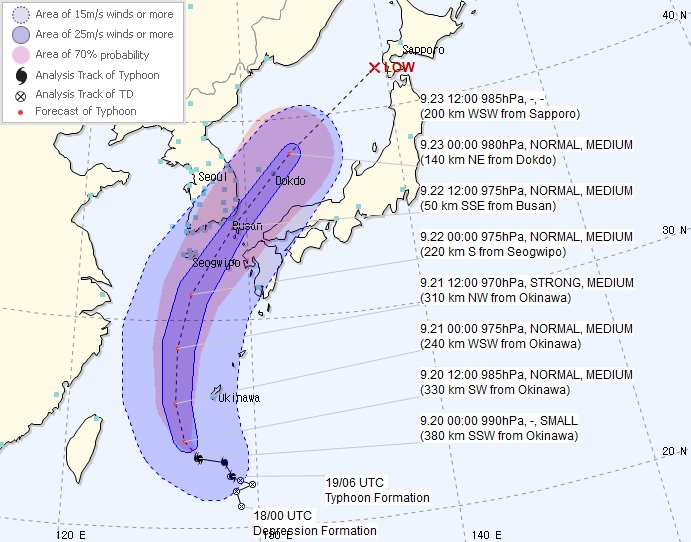 Anchor: Heavy rains and strong winds are forecast to hit the southeastern regions of South Korea over the weekend as Typhoon Tapah gets closer to the Korean Peninsula from waters 380 kilometers south-south-west of Japan's Okinawa region.
Choi You Sun has the latest.

Report: The Korea Meteorological Administration said on Friday that Tapah, this year's 17th typhoon, is expected to pass closer to the southeastern region of the Korean Peninsula than previously expected.

The agency said the typhoon will continue to gain speed and force as it makes its way towards South Korea.

Tapah took shape 470 kilometers south of Okinawa in the western Pacific Ocean the previous day and has been tracking northward since.

It is projected to pass through waters 220 kilometers south of the Seogwipo region of Jeju Island by around 9:00 a.m. on Sunday, before reaching waters some 50 kilometers south-south-east of the southeastern port city of Busan later at about 9:00 p.m.

By Monday morning, the typhoon will have likely made its way to waters 140 kilometers northeast of South Korea's easternmost Dokdo islets.

Downpours are in the forecast for Jeju Island, Busan and the Gyeongsang and South Jeolla provinces from Friday through Monday.

Some areas in Jeju, including mountainous regions, may get up to 600 millimeters of rain while 100 to 400 millimeters of precipitation are expected in Busan and the Gyeongsang and South Jeolla provinces, as well as Ulleung Island and Dokdo in the East Sea.

Winds could also hit speeds of up to 160 kilometers per hour on Jeju and the southern and eastern coastal regions as Tapah tracks northeast near the peninsula.
Choi You Sun, KBS World Radio News.
Share
Print
List