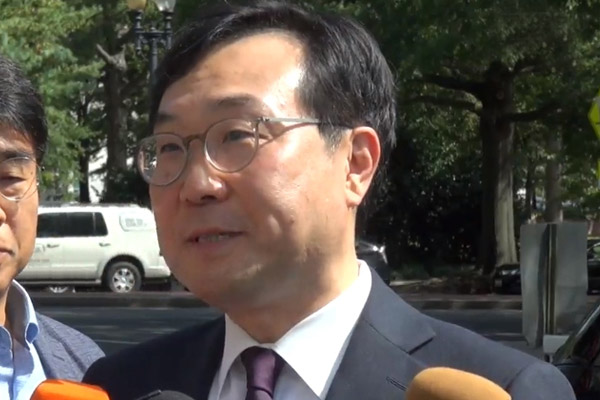 South Korea's chief nuclear negotiator Lee Do-hoon says that North Korea continues to send signals for resuming nuclear talks with the U.S.and that he discussed this matter with his U.S. counterpart Stephen Biegun.

Lee spoke to reporters after holding talks with Biegun at the U.S. State Department in Washington on Friday morning.

He said the two held in-depth discussions on how the two sides can work together towards North Korea-U.S. dialogue.

Lee also said they also discussed ways to work together with Japan, China and Russia on North Korea's denuclearization, adding that he recently visited Russia and China as well.

The envoy said what is most important for North Korea and the U.S. is to sit down and share thoughts they have had since their last summit in Vietnam.

Speaking to reporters after arriving in Washington on Thursday, Lee had also said that as far as he knows, communication continues between North Korea and the U.S. and their New York channel is always open for communication at any time.
Share
Print
List