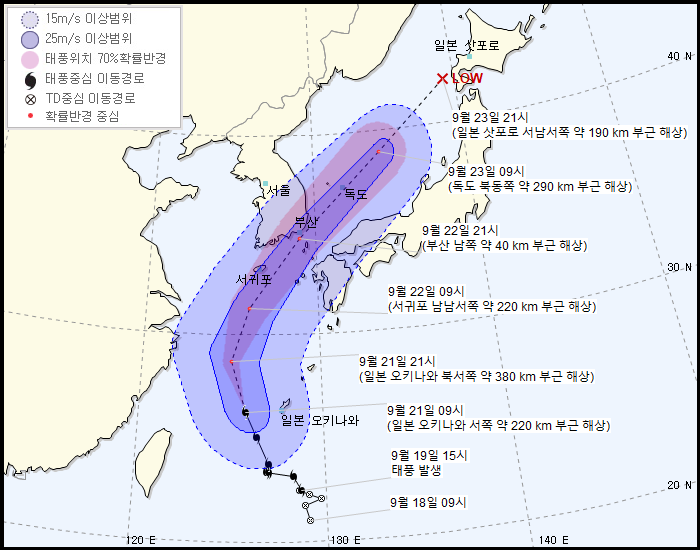 This year's 17th typhoon, Tapah, is moving northward and is expected to approach the southern port city Busan by Sunday night.

The Korea Meteorological Administration (KMA) has forecast that Tapah will travel over waters east of Jeju Island on Sunday afternoon and pass through the area between Busan and Japan's Tsushima Island later in the day.

It will then veer toward the East Sea and reach near the Dokdo Islets around early Monday.

Tapah has developed into a medium strength typhoon and is carrying large amounts of rain clouds, raising concerns of damage from heavy rains.

The KMA projects as much as 600 millimeters of precipitation in mountainous Jeju Island regions through Monday morning.

Up to 500 millimeters of rain is also forecast to pound the Gyeongsang provinces and eastern Gangwon Province.

As of 11 a.m. Saturday, the Interior and Safety Ministry raised the wind and flood damage alert level from "attention" to"vigilance" while the central disaster and safety headquarters are also working on emergency mode.
Share
Print
List