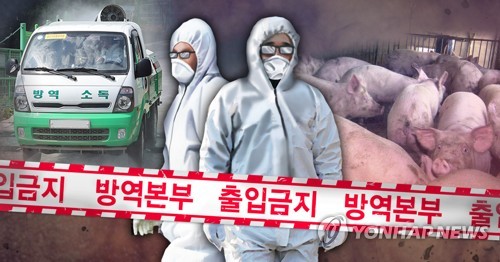 With Typhoon Tapah approaching the Korean Peninsula with heavy rains, Agriculture Minister Kim Hyeong-soo said on Sunday that quarantine authorities should launch massive disinfection operations to prevent the spread of African swine fever (ASF) as soon as the typhoon exits the country.

The minister made the remarks during an emergency meeting on ASF and the typhoon at the government complex in Sejong City.

Minister Kim said that heavy rains could wash away the disinfectants and quicklime that have been applied to prevent the spread of the deadly pig disease for the past few days.

He urged local farms to make strict preparations so that quarantine authorities can launch disinfection operations as soon as the rain stops.

The nation has been implementing nationwide disinfection operations to prevent the spread of the deadly animal disease since it reported the outbreak of the country's first ASF case in Paju near the border with North Korea last Tuesday.
Share
Print
List