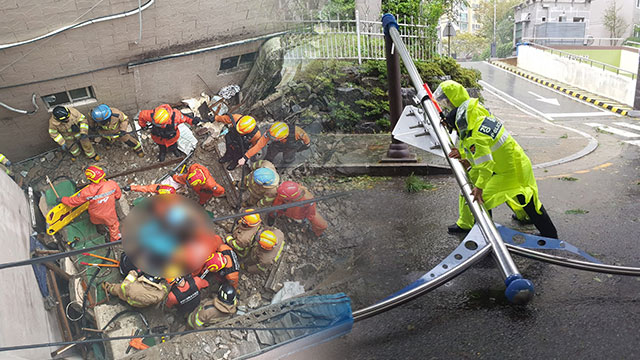 Typhoon Tapah is approaching the Korean Peninsula on Sunday with torrential rains and strong winds causing casualties and damage to southern regions.

In the southern port city of Busan, a second-story old building collapsed on Saturday, killing an elderly woman in her 70s who lived on the first floor. Two other persons in the city were injured in accidents caused by strong winds on Sunday morning.

Some 200 households in the city also suffered power failures Saturday night as a makeshift installation at a construction site hit an electric cable when it fell due to strong gusts of wind.

According to the Central Disaster and Safety Countermeasures Headquarters, about 15-hundred households in southern and Gangwon Province suffered power outages between 6 to 11 a.m. Sunday, but power has been restored to all the affected homes.

As of 11 a.m. Sunday, 79 flights were cancelled at the country's nine airports and more cancellations are expected later in the day as the typhoon approached the country.