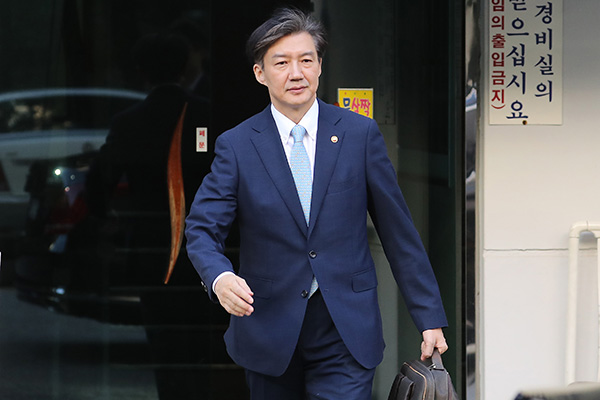 The prosecution raided the residence of Justice Minister Cho Kuk on Monday as part of its probe into corruption allegations involving the minister's family.

The Seoul Central District Prosecutors' Office sent investigators to Cho's house in southern Seoul at around 9 a.m. to secure computer hard drives and other materials.

Cho's wife, Chung Kyung-shim, allegedly asked her asset manager at a securities firm to replace computer hard drives at her house after the prosecution launched investigations into Cho's family.

The asset manager, surnamed Kim, reportedly testified that Cho expressed gratitude for helping his wife when Kim was replacing the computer hard drives at Cho's house.

The prosecution is looking into suspicions that Chung destroyed evidence and that Cho abetted the process.

Chung, a professor at Dongyang University, was indicted earlier this month on charges of forging a college presidential citation to help her daughter enroll in a medical school.