Moon in New York to Hold Summit with Trump, Speak at UN 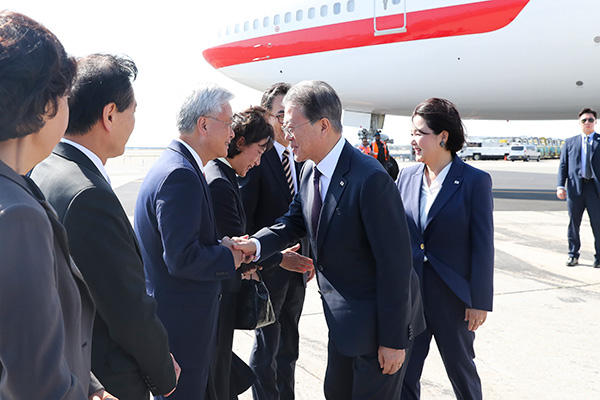 Anchor: President Moon Jae-in arrived in New York on Sunday to attend the UN General Assembly and a summit with U.S. President Donald Trump. Amid expectations that the meeting between the two leaders may help Pyongyang and Washington establish common ground ahead of working-level talks, South Korea's top diplomat said that the U.S. is open to discussions on security assurances for North Korea.
Celina Yoon has more.

Report: President Moon Jae-in arrived in New York on Sunday for a five-day stay, during which time he will meet U.S. President Donald Trump and participate in the UN General Assembly.

Foreign Minister Kang Kyung-wha, who is accompanying the president, briefed the media on Moon's itinerary.

[Sound bite: Foreign Minister Kang Kyung-wha (Korean)]
"[The UN General Assembly] will enhance partner nations' understanding of our major policies, including the peace process on the Korean Peninsula. [It will also be a useful opportunity] to bolster a basis for cooperation and support with our major allies."

Kang also spoke on the anticipated resumption of working-level talks between the U.S. and North Korea, which is expected to be a key topic of discussion when Moon and Trump meet on Monday.

She said that the U.S.’ basic disposition is to enter negotiations with North Korea with an "open attitude" regarding all issues, including security guarantees and sanctions which Pyongyang has stated must be key elements of any denuclearization deal.

Kang added that the two allies are scrutinizing North Korea’s stated agenda and that the summit presents an opportunity to further share and flesh out mutual positions on various issues.

During the summit, Moon may preview his proposal for security guarantees for North Korea, which will be presented in a keynote speech at the UN General Assembly on Tuesday.

On top of North Korea's denuclearization, the two leaders are likely to discuss other pending issues such as cost-sharing for the upkeep of U.S. troops in South Korea.

Despite North Korea’s stated willingness to resume talks with Washington by month’s end, it remains to be seen whether Moon’s New York trip will create the necessary conditions for working-level talks to materialize, as well as another summit between Pyongyang and Washington.
Celina Yoon, KBS World Radio News.
Share
Print
List