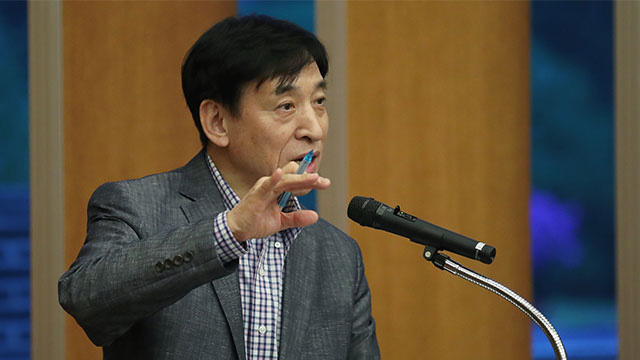 Bank of Korea Governor Lee Ju-yeol said that it will not be easy for the country to meet the two-point-two percent growth target for this year.

In a meeting with reporters in Incheon on Friday, the BOK chief presented the gloomy prospect for the economy, citing increasing downside risks.

In July, the central bank slashed its growth estimate to two-point-two percent from the two-point-five percent forecast three months earlier.

Lee said that it has been two months since the BOK revised its growth outlook in July, and considering the conditions over the past two months, downside risks may have become greater.

Regarding concerns that the economy is sliding into deflation, the BOK chief said the current low inflation was largely due to a base effect created by a rare and unusual spike in prices of agricultural products last year.

He projected the base effect will disappear at the end of the year at the earliest or early next year, after which the inflation rate will reach around one percent.
Share
Print
List