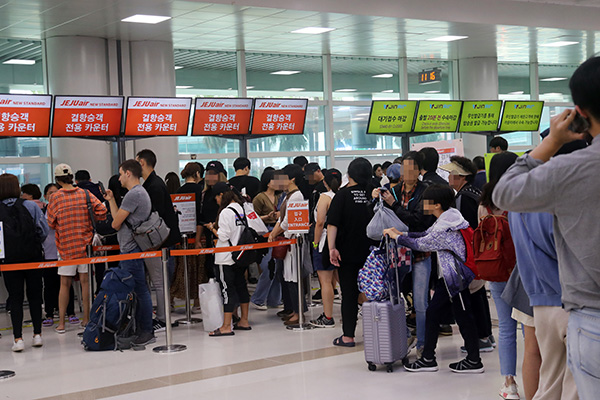 Hundreds of flights scheduled to depart from or arrive on Jeju Island have been cancelled on Wednesday as typhoon Mitag landed in waters off the southern island province.

According to the Ministry of Land, Infrastructure and Transport and the Korea Airports Corporation, over 150 flights scheduled to leave Jeju International Airport in the day had been cancelled as of 3 p.m.

Around 200 other flights most of which were scheduled to leave for Jeju from other domestic airports have also been cancelled, including 100 at Gimpo and 47 at Gimhae.

In addition, five other flights at Incheon International Airport were cancelled, including ones that were scheduled to leave for or arrive from China and Busan.

An official at the ministry said more flight cancellations could ensue as the typhoon approaches the Korean Peninsula.
Share
Print
List