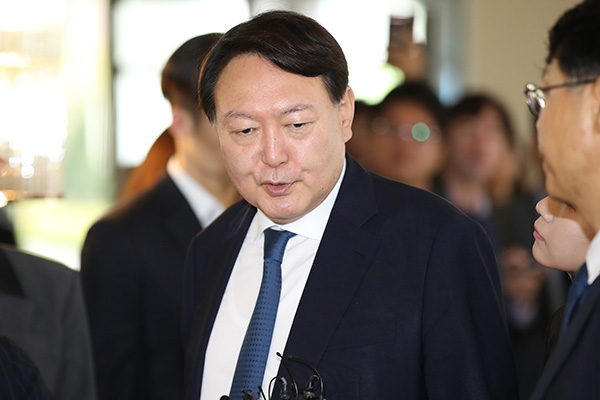 A local weekly has reported that Prosecutor General Yoon Seok-youl was invited to a luxurious countryside villa owned by a contractor who was arrested on bribery charges in a scandal involving former Vice Justice Minister Kim Hak-ui.

Hankyoreh 21 said on Thursday that the top prosecutor was entertained at the villa owned by Yoon Jung-cheon, but that the prosecution did not investigate such allegations.

The weekly said that it interviewed at least three key officials familiar with the investigation into the former vice justice minister. The high-profile sex and bribery scandal was re-opened earlier this year by the prosecution after Kim was twice cleared of suspicions.

Citing the officials, the weekly said that during the reopened probe, a team of prosecutors found the name "Yoon Seok-youl" while reviewing phone numbers, business cards and schedule books belonging to the the contractor.

The team reportedly secured contractor Yoon's testimony that the top prosecutor was acquainted with him and was entertained multiple times at his villa in Wonju, Gangwon Province.

The weekly said that a Justice Ministry panel in charge of the Kim scandal, however, did not pursue the allegations further and closed the case even after receiving a report from the probe team.