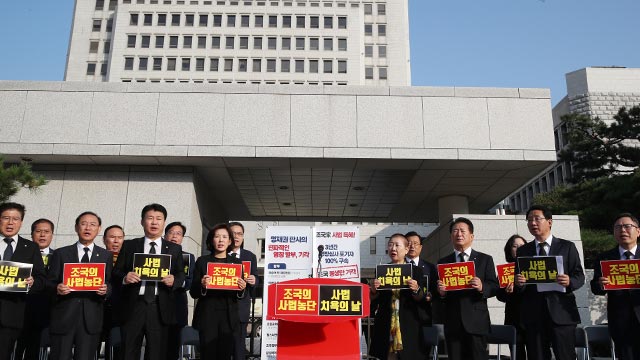 The main opposition Liberty Korea Party(LKP) held an open-air meeting in front of the Supreme Court building on Friday and denounced a lower court's decision to reject an arrest warrant request for the younger brother of Justice Minister Cho Kuk.

LKP Floor Leader Na Kyung-won said the court’s decision made two days ago is incomprehensible and demonstrates the epitome of the judiciary’s monopolization of the law.

Na said “freedom, equality and justice” which are written out at the entrance of the Supreme Court, are being thoroughly crushed in the judiciary system led by Supreme Court Chief Justice Kim Myeong-su.

Na claimed the nation is seeing a serious crisis in terms of Constitutional order.

On the prosecution’s probe into Cho’s family, the floor leader said all those who delivered kickbacks have been arrested but the figure who pocketed those funds has yet to be imprisoned. Na said she cannot help but ask if the judiciary is aiming to protect law and order or Cho’s family.

Ahead of the meeting, Na and other LKP lawmakers shouted slogans, saying the people are angry over what it described as the Moon administration having a firm grip over the judiciary.
Share
Print
List