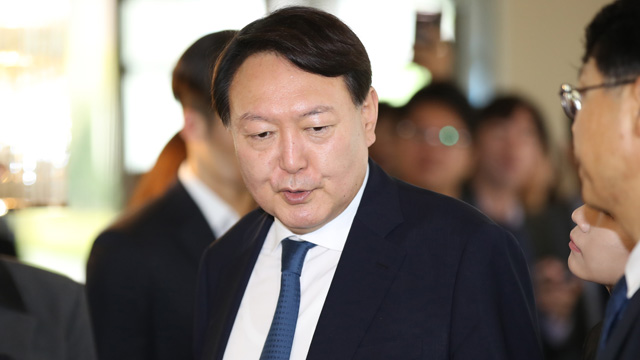 The prosecution has denied a report by a local weekly that it dismissed allegations that Prosecutor General Yoon Seok-youl was entertained by a contractor who was arrested in a sex-bribery scandal involving a former vice justice minister.

The Supreme Prosecutors’ Office said on Friday that the top prosecutor doesn't know the contractor and has never visited his villa.

It said that during a verification of Yoon before his appointment earlier this year, the office of the presidential secretary for civil affairs determined that such allegations are groundless.

The prosecutors' office expressed regret over the report and said it will take appropriate criminal and civil action.

Weekly magazine Hankyoreh 21 reported on Thursday that a special Justice Ministry panel set up to look into past wrongdoings of the prosecution received testimony from the contractor that the top prosecutor was entertained at his Gangwon Province villa a number of times.

The magazine alleged that the prosecution ignored the allegation despite receiving a report on the matter from the probe team.
Share
Print
List