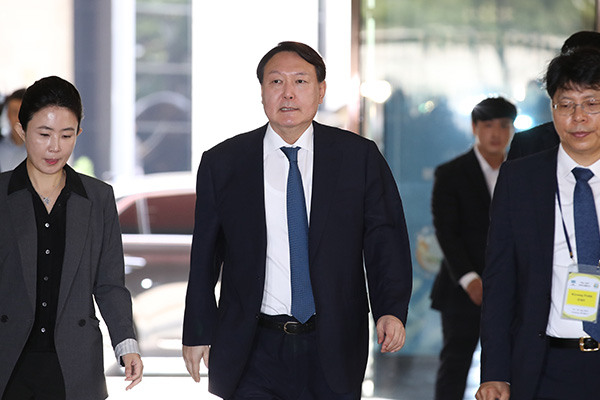 Anchor: A local magazine says Prosecutor General Yoon Seok-youl had years ago been invited to a countryside villa notorious for sex parties hosted by a corrupt businessman. The weekly said the prosecution knew about Yoon's alleged relations with the businessman but decided not to probe him. The prosecution denied the accusations.
Kim Bum-soo reports.

Report: The 2013 Kim Hak-ui sex scandal originated from a sex tape filmed at a luxury villa located deep inside a forest in Gangwon Province.

The former vice justice minister is alleged to have joined sex parties hosted by construction subcontractor Yoon Jung-cheon at the forest hideaway. Some of the women who attended the parties allege that they were raped.

After its decision not to indict the two in 2014, the prosecution earlier this year reopened the case, putting Kim and Yoon in pretrial detention on bribery and other charges.

In its latest edition, "Hankyoreh 21" said the prosecution in 2013 learned about Yoon's alleged visits to the villa. However, according to the weekly, the prosecution during its rigorous reinvestigation fell short of probing Yoon, who was then leading the Seoul Central District Prosecutors' Office and considered a rising star.

Hankyoreh said it interviewed three sources familiar with the probe, which found the name Yoon Seok-youl in businessman Yoon's phone number lists and his notebook.

The businessman is also said to have acknowledged his relations with now-prosecutor chief Yoon while others testified that he visited the villa multiple times.

The magazine did not elaborate on what may have occurred during Yoon's visits to the villa.

The spokesperson of the prosecution said Friday that the prosecutor general is not at all acquainted with the businessman and has never visited the villa in question.

While announcing its plans for legal action, the prosecution further noted that all the allegations were dismissed through a vetting process by the presidential office's civil affairs office before Yoon's nomination.