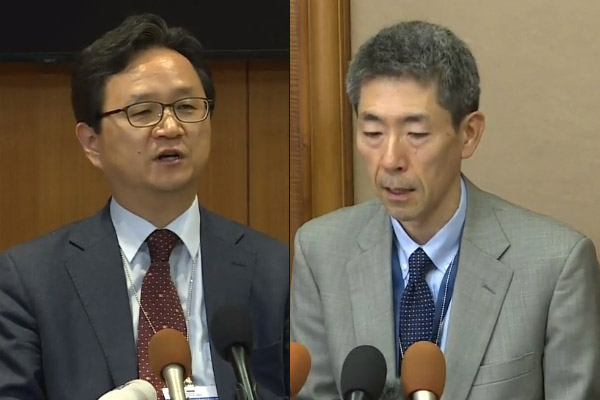 South Korea and Japan have agreed to hold further talks at the World Trade Organization regarding their trade dispute over Japan's export restrictions against Korea.

The first round of talks ended on Friday in Geneva after Seoul filed a complaint with the world trade body over Tokyo's export curbs last month.

Trade Ministry official Chung Hae-kwan, Korea's chief delegate to the bilateral talks, said Friday the two sides agreed that more consultations are necessary and decided to schedule a second round of talks through diplomatic channels.

Seoul's complaint argues that Japan restricting exports of three high-tech materials and transfer of related technology to Korea violates a number of free trade rules including the General Agreement on Tariffs and Trade (GATT), the Agreement on Trade-Related Aspects of Intellectual Property Rights (TRIPS) and Trade Related Investment Measures (TRIMS).

Japan maintains the stance that South Korea's trade control of the materials have not been properly managed, citing possible diversion for military use.

As bilateral discussions must take place within 60 days after a trade complaint is filed, the next round of talks is expected before November tenth.

The Seoul government has said that at least during the 60-day period, it will focus on dialogue without taking the next steps of requesting the WTO Dispute Settlement Body to establish a panel into the case.
Share
Print
List