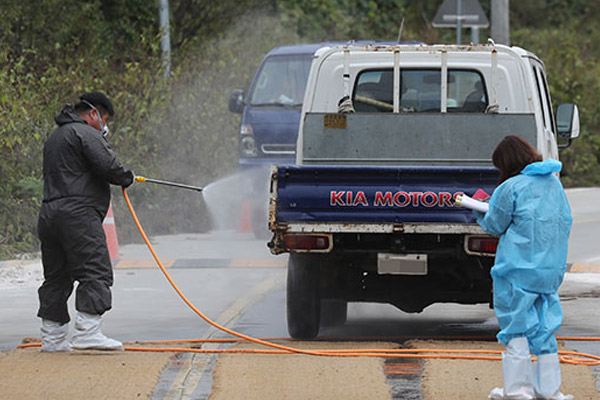 The government has stepped up quarantine immediately after wild boars found dead in North Korean border areas were confirmed to have had the African swine fever (ASF).

The Ministry of Agriculture, Food and Rural Affairs asked authorities in Gangwon Province border regions to strengthen quarantine measures to prevent the animal disease from spreading through wildlife.

Local officials are also asked to inspect fences around farms to block the infiltration of boars and use all available equipment to sterilize areas inside and outside farms.

The military will also do its part, conducting sterilizations in areas north of the civilian control line, including the demilitarized zone, and cooperating with provincial governments in quarantine efforts along streams and coastal roads.

The Environment Ministry earlier said that one out of four wild boar corpses found in Cheorwon, Gangwon Province on Friday tested positive for the African swine fever.

Another wild pig that was found staggering with unsteady steps in Yeoncheon, Gyeonggi Province has also tested positive.

Another boar was found dead infected with the virus in the demilitarized zone in Yeoncheon last week.
Share
Print
List