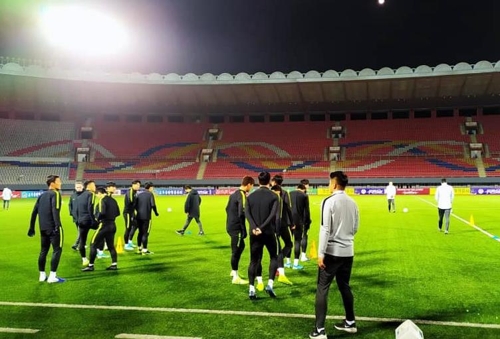 South Korea's national soccer team on Monday got in an hour of practice a day before their World Cup qualifying match in Pyongyang.

The Korea Football Association said that the South Korean team spent an hour on the pitch at Kim Il-sung Stadium from 8 p.m after arriving in the North Korean capital earlier that afternoon.

The team then headed to the city's Koryo Hotel. It was the first and last practice opportunity for the team on the field's artificial grass before Tuesday's match.

The two Koreas, competing in Group H, will play a 2022 FIFA World Cup qualifier at 5:30 p.m. Both teams are undefeated in group play thus far.