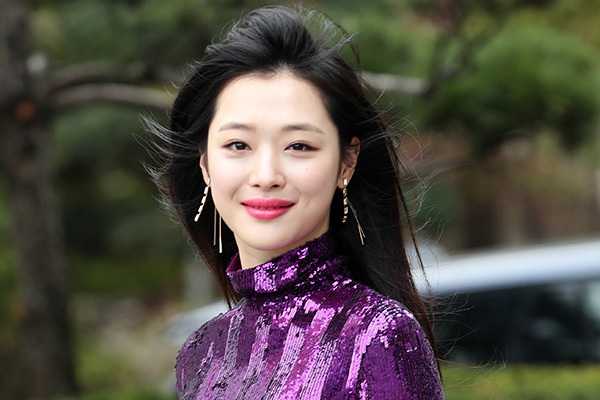 Anchor: Music artists, actors and fans in South Korea and abroad are mourning the death of singer-actor Sulli, who was found dead in an apparent suicide. As entertainment events are being cancelled, there are increasing suspicions that cyberbullying may have contributed to her death.
Celina Yoon has more.

Report: Sulli, a star in the Korean entertainment industry, was found dead on Monday in what is believed to be a suicide.

The 25-year-old was found dead by her agent at her residence just south of Seoul on Monday afternoon.

Fellow stars took to social media to express their condolences, with singer Goo Hara -- one of Sulli's closest friends -- posting photos on Instagram and saying she wishes that Sulli is doing what she wants in heaven.

Born in 1994, Sulli debuted as a child actor in 2005. She began her K-pop career as a member of the girl group “f(x)” in 2009, achieving international fame. She also continued her acting career, both on the big and small screen.

She temporarily suspended her career in 2014, apparently due to cyberbullying. Sulli returned to the entertainment scene the following year, leaving f(x) to focus on acting. She also hosted a cable news program where celebrities talk about their experiences with online harassment.

The singer-actor continued to be the target of cyberbullying, however, and some have claimed her suicide was driven in part by malicious comments and rumors about her spread online.

While expressing condolences to the artist it managed, SM Entertainment said that the funeral for Sulli will be held privately according to the wishes of her family and asked for no media coverage.