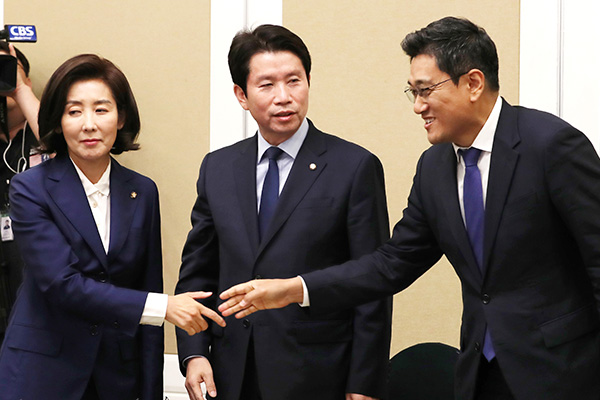 South Korea’s rival political parties have launched discussions on fast-tracked judiciary and prosecutorial reform bills but are struggling to narrow their differences.

During their first round of talks at the National Assembly on Wednesday, the ruling Democratic Party, the main opposition Liberty Korea Party and the minor opposition Bareunmirae Party presented their stances and confirmed differences on matter.

His LKP counterpart, Na Kyung-won, however, claimed that the proposed unit is only intended to prolong the ruling bloc’s power and that her party would never allow it.

The two camps were also far apart on the issue of rebalancing power between the prosecution and police with the DP calling for the abolition of the prosecution’s power to lead criminal investigations and the LKP seeking to maintain the status quo.

The three sides, each represented by their floor leaders and a party official, are scheduled to meet again on Wednesday of next week.
Share
Print
List