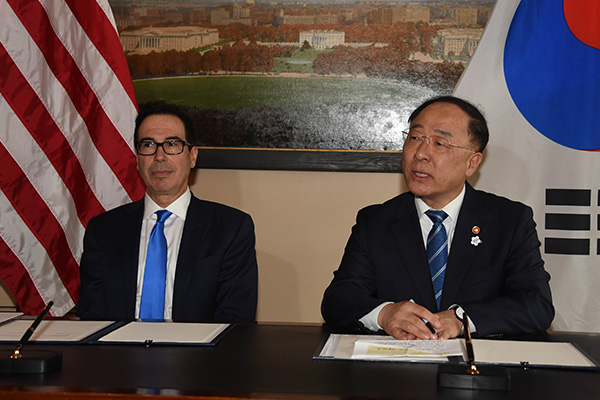 Finance Minister Hong Nam-ki expressed concern that Japan's export restrictions against South Korea could impair the global value chain and have a negative impact on the world economy.

The minister voiced the concerns on Thursday during talks with U.S. Treasury Secretary Steven Mnuchin on the sidelines of a Group of 20 meeting of finance ministers and central bank governors in Washington.

Hong said that Japan's export controls violate international trade rules and could negatively impact the global economy, expressing hope that Seoul and Tokyo will resolve their disputes as soon as possible through dialogue and diplomacy.

According to the Finance Ministry, Hong also called for an exemption from U.S. tariffs on South Korean automobiles.

In response, Mnuchin said that Washington will fully take into account South Korea's position on possible auto tariffs and that the U.S. also appreciated Seoul's efforts to increase transparency in its currency policy.
Share
Print
List