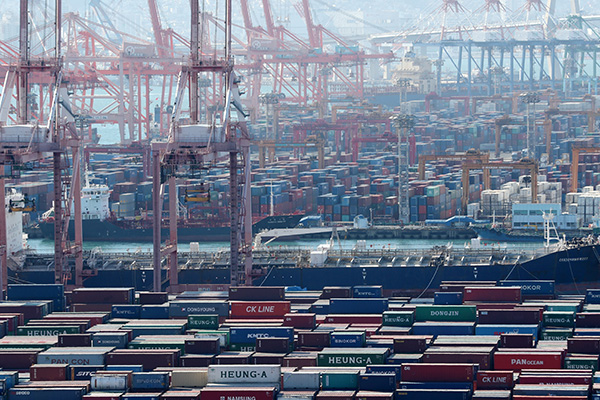 Anchor: South Korea's export-driven economy is struggling as the U.S.-China trade war plays out. Outbound shipments continued to drop in the first 20 days of October and both the finance minister and the Bank of Korea chief say that economic growth this year will be lower than previous outlooks.
Celina Yoon has more.

Report: South Korea's exports decreased notably in the first 20 days of October, pulled down by a sluggish global semiconductor market.

According to the Korea Customs Service on Monday, the country's exports stood at 26-point-eight billion U.S. dollars in the October one to 20 period, down 19-point-five percent from the same period last year. Exports of semiconductors and petrochemical products dipped 28-point-eight and 38-point-four percent, respectively.

As outbound shipments have declined for ten consecutive months dating back to December last year, there is concern that gross domestic product(GDP) growth for the third quarter, which the Bank of Korea(BOK) will announce this week, may fall short of expectations.

There is consensus among economists that unless South Korea achieves at least point-six percent growth in the third and fourth quarters, respectively, annual growth will fall below two percent.

Finance Minister Hong Nam-ki said on Friday that the economy is likely to grow two or two-point-one percent this year, point-four percentage point lower than the government's previous outlook announced in July.

Hong said he expects next year’s growth to be slightly over two-point-two or two-point-three percent, as the government plans expansionary policies.

He added that a delayed recovery of the semiconductor market is further affecting the growth rate.

The central bank chief, however, projected that the economy would pick up next year if the U.S. and China avoid a worst-case scenario through a partial trade deal and the semiconductor market makes a recovery around the middle of 2020.
Celina Yoon, KBS World Radio News.
Share
Print
List