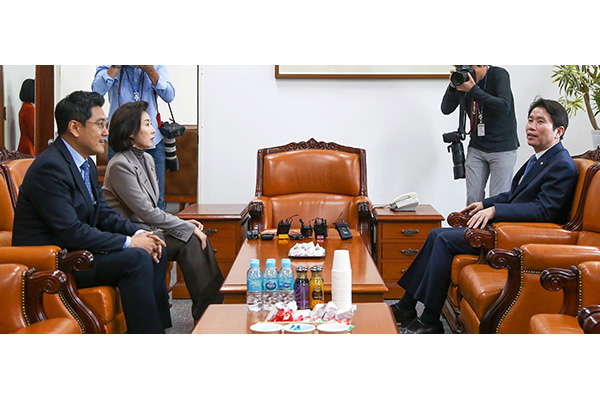 South Korea's political parties failed to reach an agreement on how to handle a reform bill that aims to create an independent agency to investigate corruption allegations against high-ranking government officials.

The floor leader of the ruling Democratic Party(DP), Lee In-young, said on Monday that he and his counterparts from the main opposition Liberty Korea Party(LKP) and the minor opposition Bareunmirae Party fell short of narrowing their differences.

The DP is pushing to get the bill passed through the National Assembly this month, ahead of other fast-tracked bills on electoral and judicial reforms.

The LKP is strongly opposed to such moves, claiming that the intent is to cover up controversies surrounding the Moon Jae-in administration.

At Monday's parliamentary audit, the DP accused the LKP of opposing the idea, which it supported during previous administrations, in favor of the prosecution probing alleged assault by its representatives during April's fast-tracking of the reform bills.

The LKP, on the other hand, accused the DP of pushing the bill to give what it claimed was preferential treatment to former Justice Minister Cho Kuk's wife, Chung Kyung-shim.

The opposition also demanded an apology from the ruling camp regarding the prosecution's probe into former conservative presidents Lee Myung-bak and Park Geun-hye, which involved overnight questioning and public summons.
Share
Print
List