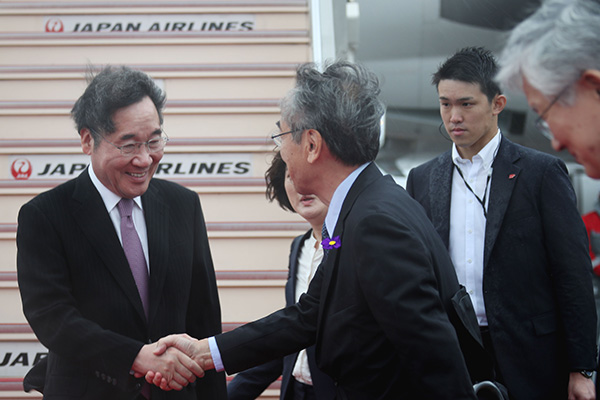 Amid an impasse in relations over colonial-era grievances and trade restrictions, Lee said on social media before departing that he will meet during his trip Japanese political and business leaders, including Prime Minister Shinzo Abe, to expedite dialogue between Seoul and Tokyo.

Naruhito is set to formally proclaim his ascension to the throne in a ceremony at 1 p.m. Tuesday at the Imperial Palace in Tokyo.

The prime minister will attend the ceremony as well as a banquet hosted by the new emperor on Tuesday night.

Lee will also visit Shin Okubo station in Tokyo on Tuesday to pay his respects to Lee Soo-hyun, a South Korean who was hit by a train trying to rescue a Japanese man who had fallen onto the tracks in 2001.

Lee is scheduled to meet with Abe on Thursday for about ten minutes. He will reportedly convey a message from President Moon Jae-in to Abe expressing Seoul's desire to improve strained relations between the two nations.
Share
Print
List