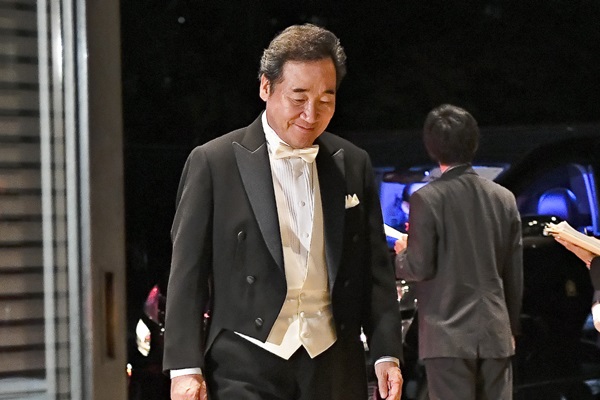 Prime Minister Lee Nak-yon says that when he meets Japanese Prime Minister Shinzo Abe on Thursday, he will focus on creating a mood conducive to South Korea-Japan dialogue.

Lee made the remarks to reporters at his hotel on Wednesday, a day after he attended a banquet hosted by Japan's new emperor, Naruhito, who formally proclaimed his ascension to the throne earlier that day.

Lee said Seoul-Tokyo ties remain strained, adding that he doubts a few "dramatic" words with Abe will change much.

Lee added that it is difficult to expect that the meeting would produce an agreement or related outcomes.

Lee is only scheduled to meet with Abe for around ten minutes as the Japanese prime minister is set to host a series of other meetings with foreign dignitaries who attended Naruhito's enthronement ceremony.

Lee's remarks suggest that time constraints will limit the scope of discussions with Abe on pending issues, such as Japan's export restrictions and Seoul's subsequent decision to terminate a military intelligence sharing agreement.
Share
Print
List