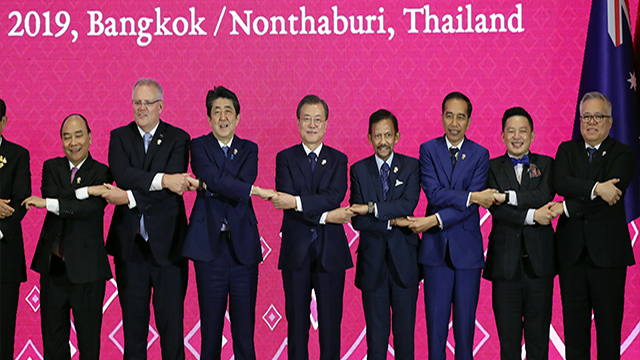 Anchor: South Korea and over a dozen other Asia-Pacific nations have concluded negotiations on the world's biggest multilateral free trade agreement known as the Regional Comprehensive Economic Partnership. The pact involves all ten Association of Southeast Asian Nations member states as well as China, Australia and others, and is poised to help boost exports and lower consumer prices.
Celina Yoon has more on what this means for the South Korean economy.

Report: Fifteen nations on Monday agreed on the terms of a mega Asia-Pacific trade pact known as the Regional Comprehensive Economic Partnership, or RCEP.

The deal is expected to open doors even wider for South Korean exporters and builds on the free trade agreements(FTA) Seoul has inked with virtually all RCEP participants.

Manufacturers, especially electronics and auto makers, are expected to increase exports to the 15 countries involved in the agreed deal, and investment is poised to grow as well.

The trade pact is expected to help maximize benefits by minimizing restrictions and streamlining customs procedures among RCEP signatories.

While differing rules of origin and customs procedures restrict businesses with geographically dispersed supply chains from getting the most out of FTAs, RCEP standardizes related rules among participating countries.

South Korean companies are expected to benefit even more as they have set up diverse production facilities in RCEP countries through continuous investment.

The agreement is also expected to lower prices for consumers by slashing tariffs.

However, there is concern that South Korea's relatively vulnerable agriculture and fishing sectors may lose out to farming powerhouses such as China, Australia and New Zealand as well as Southeast Asian countries that are competitive in the fishing industry.

The Korea Rural Economic Institute noted in a 2017 report that RCEP is expected to adversely affect grain and vegetable farmers in South Korea. It added that fruit producers may also be hurt if the deal affects quarantine regulations.

RCEP participants plan to sign the trade deal next year after a legal review of the agreement and finalizing remaining negotiations to open their markets. India, which had participated in RCEP talks, rejected Monday's agreement over concerns of foreign competition.
Celina Yoon, KBS World Radio News.
Share
Print
List