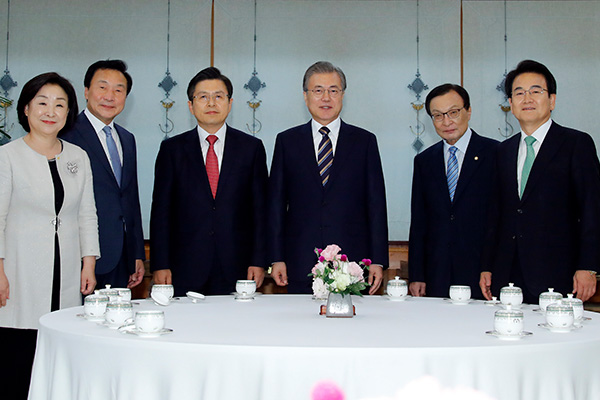 President Moon Jae-in will meet with the leaders of South Korea's five political parties on the weekend, amid a partisan stalemate over key reform bills and other issues.

According to political sources on Friday, Moon invited the party leaders to his office for a dinner gathering on Sunday, to thank them for paying their condolences upon the recent passing of the president's mother.

The leaders of the ruling Democratic Party, the main opposition Liberty Korea Party and the minor opposition Bareunmirae Party, Justice Party and Party for Democracy and Peace all have expressed their intent to attend.

It will be Moon's fifth time to invite the party leaders to his office and the first since they met to discuss Japan's trade restrictions targeting South Korea in mid-July.

During the closed-door meeting, which marks the halfway point of Moon's five-year term in office, Moon is expected to seek partisan cooperation behind the passage of the reform bills and next year's government budget and garner support for his peace efforts on the Korean Peninsula.

The president and the party heads could also seek ways to resolve the prolonged trade row with Japan ahead of the November 22 expiration of a military intelligence sharing pact between Seoul and Tokyo.
Share
Print
List