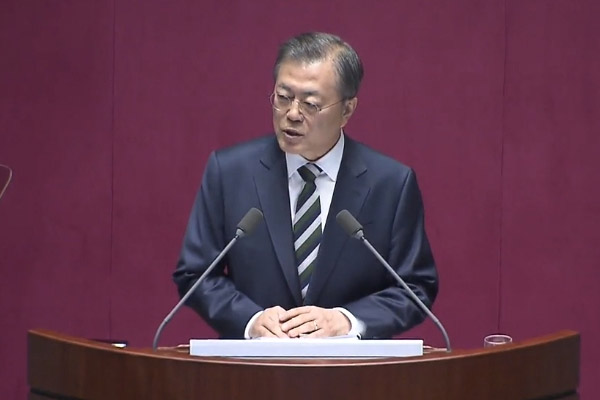 Report: KBS has conducted a survey asking the public to hand down judgement on state governance for the first half of President Moon Jae-in's time in office.

Approval rating recorded 49-point-seven percent and disapproval 46-point-six, with the difference within a margin of error.

The ratings have returned to levels before the Chuseok holiday. It was around Chuseok when disapproval was higher  than approval for the first time in the polling amid the scandal involving the former justice minister.

In the latest survey, respondents gave the highest marks for inter-Korean relations and diplomacy, followed by welfare policy and political reform.

But positive appraisal of cross-border ties somewhat diminished from previous polls, apparently reflective of the current strain in relations with North Korea.

On the other hand, points were low in economic policies including job creation and the real estate policies.

The public were also asked about which party was the most responsible for the failure in cooperative politics. Forty-five percent blamed the opposition while 30 percent pointed the finger to the president.

Regarding the future direction in state affairs, some 38 percent hoped for innovation to boost the economy while about 30 percent called for fairness to build a just society.

On the issue of tourism to North Korea's Mount Geumgang resort following Pyongyang's threat to remove South Korean facilities there, over half of the surveyed said that efforts to resume tourism are necessary, outnumbering those who want the project's suspension.

As for a military intelligence sharing agreement with Japan which is to expire on November 22nd, over 57 percent said the pact should be terminated as planned, which is 20 percentage points more than those who object ending the deal.

The KBS survey conducted via telephone and mobile on one thousand adults by pollster Hankook Research has a 95 percent confidence level with a margin of error of plus or minus three-point-one percentage points.
Kim Soyon, KBS World Radio News.
Share
Print
List