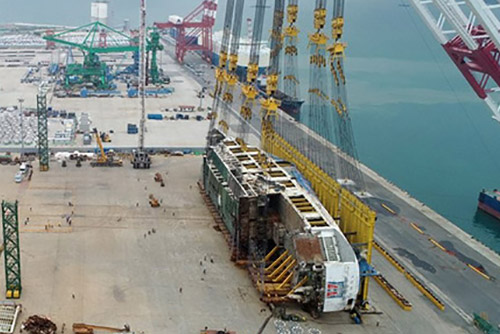 South Korea's prosecution has launched a special team to reinvestigate the 2014 Sewol ferry sinking, one of the country's worst maritime disasters that killed more than 300 people.

At a briefing on Monday, Im Kwan-hyeuk, the chief of the Suwon District Prosecutors' Office's Ansan branch named to lead the task force, vowed to focus on finding the truth behind the fatal incident while maintaining political neutrality.

The 20-member team, which was formed at the instruction of Prosecutor General Yoon Seok-youl, will be tasked with determining the exact cause of the disaster and investigating any lax handling of rescue operations under the previous Park Geun-hye administration.

Im said priority of the investigation will be finalized after his team reviews previous investigative records by the Seoul Southern District Prosecutors' Office and an independent inquiry panel.

The six-thousand-800-ton ferry sank in waters off the country's southwestern coast on April 16, 2014, killing 304 of 476 passengers, most of whom were high school students on a school trip to Jeju Island.
Share
Print
List