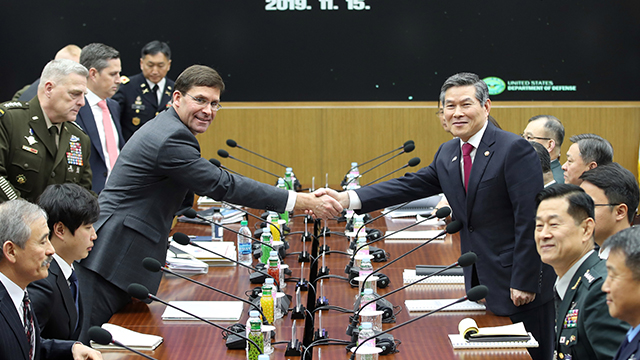 Washington's defense chief is urging Seoul and Tokyo to patch up their differences and work towards renewing their military intelligence-sharing pact, saying its termination will only benefit North Korea and China.

U.S. Secretary of Defense Mark Esper made the call Friday at a joint press briefing with his South Korean counterpart, Jeong Kyeong-doo, after holding the annual Security Consultative Meeting in Seoul.

Esper said the General Security of Military Information Agreement(GSOMIA), set to expire on November 22, is an important tool for the U.S. and its two allies to effectively share information, particularly in times of war.

Regarding Seoul and Washington's ongoing negotiations to renew their defense cost-sharing agreement, Jeong said they shared the view that the size of Seoul's contribution to stationing U.S. troops on the Korean Peninsula should be decided at a "fair and mutually-acceptable" level.

Esper said it would be critical for the allies to complete negotiations by year's end to renew the Special Measures Agreement(SMA) for 2020.

Although he did not give exact numbers, Esper said South Korea is a wealthy country and could and should offset the cost of defense.