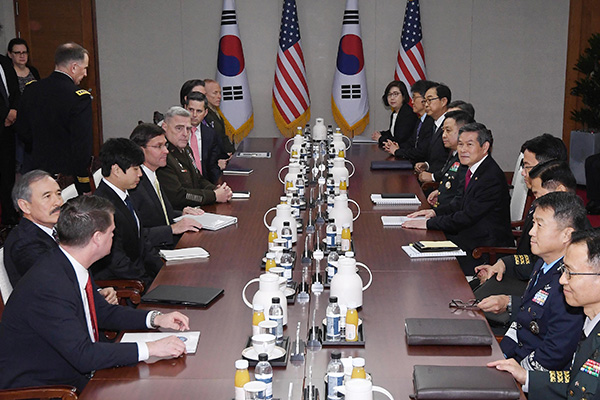 During the annual Security Consultative Meeting(SCM), the two sides also agreed to continue security cooperation between South Korea, the U.S. and Japan to ensure readiness and preparation in the face of North Korean threats.

In a joint news conference that followed the meeting, the two defense chiefs said they reaffirmed that the bilateral alliance will continue against any challenges.

They noted the alliance has been a key pillar for peace, stability and prosperity on the Korean Peninsula and in the region over the past 70 years.

Jeong and Esper said the two sides reaffirmed the shared goal of achieving North Korea's complete denuclearization and lasting peace on the peninsula.

They said they will support both governments' diplomatic efforts on denuclearization while maintaining ironclad defense readiness.

The two sides also agreed to work together to resume dialogue with North Korea and fully implement the inter-Korean military agreement signed in September 2018.