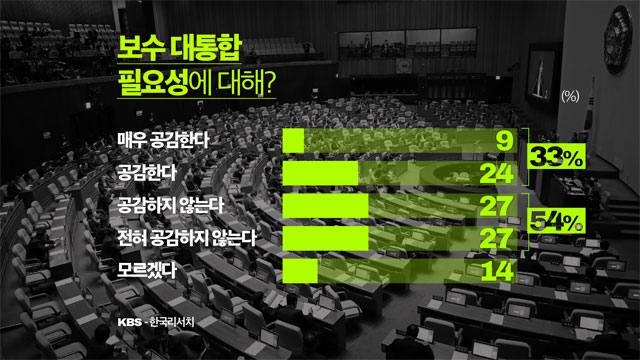 A recent poll finds that a majority of South Koreans are negative about a grand integration of conservative political parties.

Ahead of the general elections set for April next year, there is a move in the conservative bloc to integrate the main opposition Liberty Korea Party with other minor conservative political forces such as the far-right Our Republican Party and a fringe group within the Bareunmirae Party (BP) led by former BP chief Yoo Seong-min.

According to a KBS poll of over one-thousand-adults, 54 percent of the respondents said that they do not agree on the need of the conservative integration, while 24 percent responded otherwise.

In addition, 70 percent of the respondents said the conservative integration is "unlikely" to take place before the April elections, while 17 percent saw it "likely."

Regarding the imminent expiration of a military information sharing agreement between South Korea and Japan, 54 percent said South Korea should maintain its position to end the pact.

The poll was commissioned by a KBS program and conducted by Hankook Research on Thursday and Friday.

The survey had a 95 percent confidence level with a margin of error of plus or minus three-point-one percentage points.
Share
Print
List