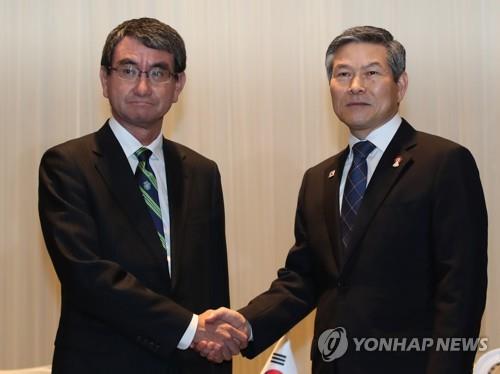 The defense ministers of South Korea and Japan held talks in Thailand on Sunday, just days before the planned expiration of the bilateral military intelligence-sharing pact, but failed to narrow gaps on the matter.

Seoul's Defense Ministry said the meeting between Defense Minister Jeong Kyeong-doo and his Japanese counterpart, Taro Kono, started at 10 a.m. in the Thai capital of Bangkok on the sidelines of the 6th Association of Southeast Asian Nations Defense Ministers' Meeting-Plus.

It is the first meeting between the defense chiefs of the two neighbors since South Korea announced its decision to scrap the General Security of Military Information Agreement (GSOMIA) in August. The pact is set to expire Saturday.

In his opening remarks at the talks, Jeong said that he feels sorry over the strained relations between the two countries, expressing hope that they improve their relationship together via defense cooperation.

In response, Kono stressed close cooperation between the two nations and among the United States, South Korea and Japan, noting the difficult security conditions in East Asia amid the continued ballistic missile launches by North Korea. He proposed that South Korea and Japan cooperate and pursue exchanges to address bilateral and North Korea issues.

After the 40-minute talk, Jeong told reporters that they held discussions just at the level of general principles, hinting that no progress was made on the military pact. The minister said he asked Japan to make active efforts to ensure the matter be resolved diplomatically.

South Korea takes the position that it could renew the military pact only after Japan withdraws its export curbs against Seoul.
Share
Print
List