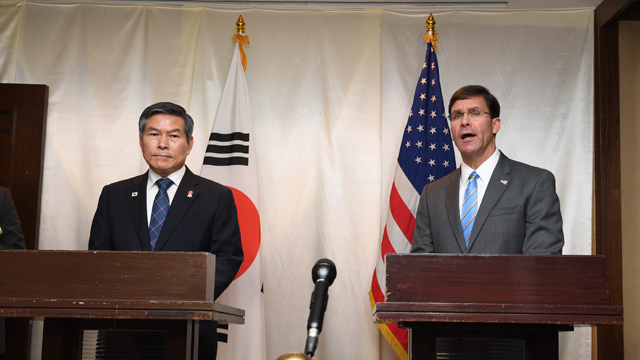 South Korea and the United States have decided to postpone their joint military exercises set for this month.

A Defense Ministry official in Seoul said that the decision was made on Sunday during a bilateral meeting between Defense Minister Jeong Kyeong-doo and his American counterpart Mark Esper in the Thai capital of Bangkok on the sidelines of the 6th Association of Southeast Asian Nations Defense Ministers' Meeting-Plus.

After the talks, Esper told reporters that Jeong and he have agreed to postpone the combined air exercises after a careful review and close consultation between the defense authorities of the two allies.

Seoul and Washington earlier planned to conduct in mid-November a scaled-back training exercise in lieu of the larger Vigilant Ace annual exercise in an effort to support diplomatic efforts to denuclearize North Korea.