Moon to Engage the Public in Televised Dialogue Tuesday 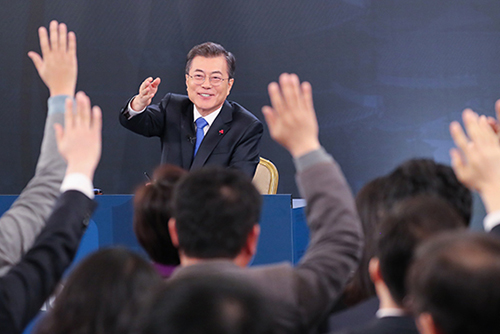 President Moon Jae-in is scheduled to hold a televised dialogue with the public Tuesday night.

According to the presidential office, Moon has cleared his schedule on Monday and Tuesday to prepare for a televised town hall meeting set to be held from 8 p.m.

The talks will present the president with a chance to explain to the public his administration's policy objectives for the remainder of his five-year term, which recently passed the halfway mark.

Moon plans to answer questions from 300 members of the general public in attendance, share his thoughts and listen to public opinion regarding state affairs, inter-Korean relations, reform plans and the economy.

It will be Moon's first live question-and-answer session since a one-on-on interview with KBS in May. The last time Moon fielded live questions from an audience was in January, when he held a press conference to welcome in the new year.

Tuesday's town hall meeting will last about 90 minutes and will be broadcast live on the television channel MBC.
Share
Print
List