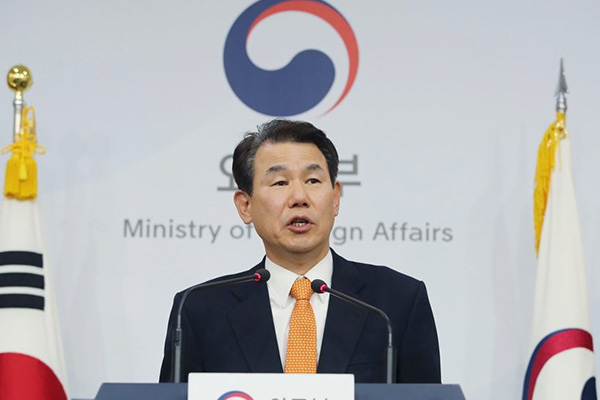 Anchor: Defense-cost negotiations between South Korea and the United States collapsed on Tuesday less than two hours after they began. Afterwards, the two sides held separate news conferences, acknowledging a sizable disagreement on how much Seoul should pay to maintain American troops on the Korean Peninsula.
Choi You Sun has the details.

Report: The second day of the latest defense cost-sharing negotiations in Seoul ended in less than two hours.

As the two sides failed to reach an accord on the thorny issue, South Korea's chief negotiator Jeong Eun-bo held a news conference.

[Sound bite: Jeong Eun-bo - S. Korean Chief Envoy to Defense Cost Talks (Korean)]
"The eleventh South Korea-U.S. defense cost-sharing negotiations didn't proceed as planned. The U.S. side has called for a drastic increase in South Korea's share through establishment of a new article in the deal, while our side has maintained the cost-sharing should be mutually acceptable within the framework of the Special Measures Agreement that the two sides have agreed on over the last 28 years. Whatever the circumstances, we plan to be patient and do our best to ensure that we take a fair and reasonable share of defense costs that contributes to strengthening the South Korea-U.S. alliance and the combined defense posture."

Under the current one-year Special Measures Agreement(SMA), set to expire on December 31, Seoul agreed to pay one-point-04 trillion won or over 870 million dollars.

Seoul argues that cost-sharing should be in line with the SMA, which covers wages for Koreans working for the U.S. Forces Korea and expenditures for military construction and logistical support.

[Sound bite: Jeong Eun-bo - S. Korean Chief Envoy to Defense Cost Talks (Korean)]
"There is a considerable gap between Washington's overall proposal and the principles we are pursuing in the negotiations. We will be patient and work to achieve cost-sharing that is mutually acceptable."

[Sound bite: James DeHart - US Chief Negotiator to Defense Cost Talks]
"We came to Seoul prepared to listen and with open minds and even prepared to adjust our stance as needed in order to move towards a mutually acceptable agreement. Unfortunately, the proposals that were put forward by the Korean negotiating team were not responsive to our request for fair and equitable burden sharing. As a result, we cut short our participation in the talks today in order to give the Korean side some time to reconsider... "

The U.S. envoy said he hopes for new proposals that enable the allies to work towards a mutually acceptable agreement, and that he looks forward to resuming talks when Seoul is ready to negotiate on the basis of mutual trust.

Tuesday's talks ended abruptly without establishing a clear timetable for the next round of talks, generating uncertainty whether the allies will be able to strike a new deal before the current one expires at the end of next month.
Choi You Sun, KBS World Radio News.
Share
Print
List