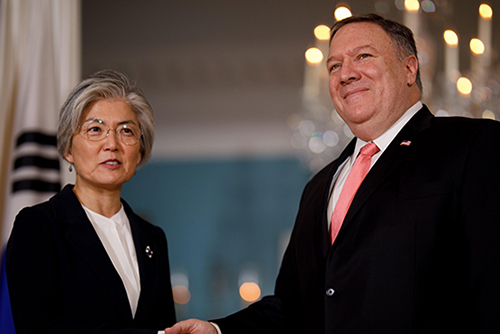 The top diplomats of South Korea and the United States held telephone talks late Thursday to discuss the imminent expiration of a military intelligence sharing pact between Seoul and Tokyo and other issues.

The Foreign Ministry said that Foreign Minister Kang Kyung-wha and U.S. Secretary of State Mike Pompeo discussed issues of mutual interest, such as the General Security of Military Information Agreement(GSOMIA) and defense cost-sharing between Seoul and Washington.

The ministry said that the two sides agreed to continue close consultations on various issues at every level. It added they also agreed on the need to meet in person at an early date for in-depth discussions and to work to coordinate the schedule.