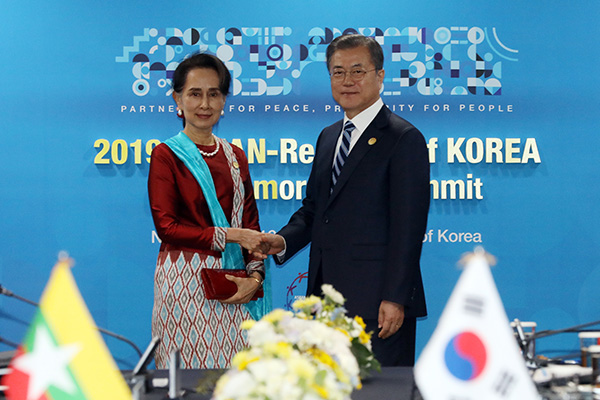 The leaders of South Korea and Myanmar say they appreciate the development of their two countries' ties and expect them to further deepen.

In a summit meeting Tuesday with Myanmar State Counsellor Aung San Suu Kyi on the sidelines of the special summit between South Korea and ASEAN in Busan, President Moon Jae-in noted the strengthened Seoul-Naypyitaw partnership.

He particularly mentioned their agreement to link South Korea’s New Southern Policy and Myanmar’s sustainable economic development initiatives during their previous summit in September and progress made on economic cooperation since then. Moon said he expects bilateral cooperation to extend to also cover jobs, education, environment and fisheries.

The South Korean leader also thanked the Southeast Asian country for donating rice to South Korea during the Korean War. In response, Suu Kyi said what matters is not rice, but Myanmar’s will to stand shoulder to shoulder with South Korea.

Myanmar’s leader also said her country will make every contribution possible to peace in Korea, adding hope to further strengthen cooperation and solidarity between the two sides.
Share
Print
List