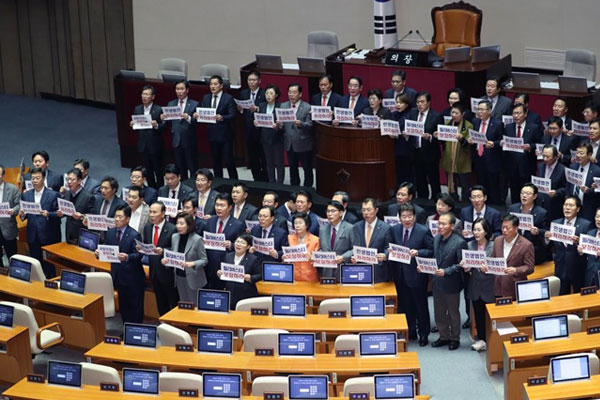 The main opposition Liberty Korea Party (LKP) on Friday filed for filibuster on 199 bills pending voting in a plenary session at the National Assembly originally set for Friday.

The ruling Democratic Party(DP) responded in protest by boycotting the plenary session.

Some 50 LKP lawmakers were on standby at the Assembly's main conference hall until 9 p.m. in case the plenary meeting was convened.

But Assembly Speaker Moon Hee-sang did not convene the session, citing a lack of quorum, as the DP and other parties refused to attend.

Therefore, key bills such as boosting accounting transparency at private kindergartens and stronger traffic safety regulations for children could not be handled on Friday.

A filibuster involves lawmakers speaking for an extended period of time on the parliament floor as a way to prevent voting or delaying the passage of bills.

Meanwhile, the ruling party has held a weekend meeting in an unusual move and labeled the main opposition's filibuster attempt as a conspiracy to paralyze parliament affairs.

DP's floor leader Lee In-young said the LKP's plan to shut down the current Assembly has failed even before it went into action.

He said he will urge the public to hand down stern judgement.

The LKP is also contemplating its next move. At least for the weekend, it seeks to maintain a hard-line stance and focus on promoting the illegality of the fast-tracked reform bills.
Share
Print
List